This weekend (16/17th of August) We went to help an acquaintance of Basz with his Straw house, The Dude (Which is the son of the old mayor of Moletai) decided to build his own house on the land of their family for his wife and future kids most likely, to live there happily ever after. We visited a while ago, when he started on the frame of his house which was rather interesting. back then it looked like this. 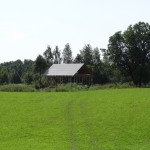 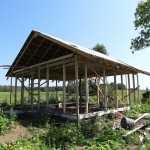 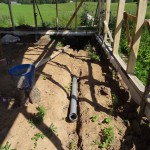 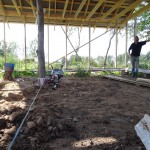 I come from a rather complicated family situation, i gues the most simple way to describe it is something like, don’t expect both sides of my family on the same table for Christmas dinner, for this will be an awkward situation. For me seeing a family like this, as in: Parents, kids, Grand kids, Grand parents, Cousins, Uncles and Everybody living together in there own house on the same plot of land as one happy family is a somewhat new experience for me.

So you can probably imagine that when we went here, I was amazed by the fact that this dude just picks a hill somewhere in their garden, chops down some trees, makes some beams out of it and starts to build his house :)) Anywayz for we are also building a Straw/Clay house And he doesn’t have so much experience with it, We joined, Cuz Basz is the Straw/Clay Guru A La Lietuva and always ready to help! also this would be my first project working with Lithuanian locals and a nice way to learn more about Straw/Clay

When we arrived on Saturday I was amazed by the progression he made. the house was Certainly getting more shape and starting to show its future awesomeness. 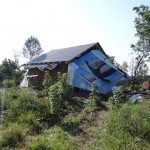 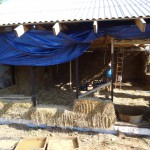 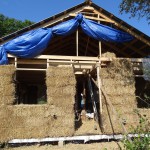 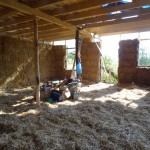 First things first, we were with a pretty nice group op people. Around 8 to 10. To keep things going and let everything go smooth, we first got our selfs an old bathtub to mix the clay in, managed to let some people get sand, some others some clay and prepared the straw bales for claying. it was rather amusing to see how things went here, i’m used to organized work and when you stand still you get a “whip up your ass” you know. but here people were very relaxed just chilling, talking a bit, having long discussions who would get clay and sand and so on. I gues there was nothing wrong with it, I was rather amused. it was just different. Also the fact that some of them were walking bare feet and children playing around the work in progress was rather amusing for me. Anyways, after checking things out for a while we just started doing what has to be done. 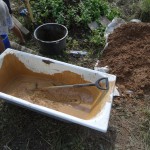 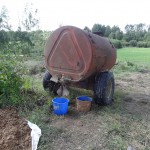 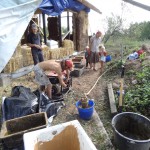 When everybody got a little idea of what was going on. things started to go pretty well. clay was always ready, we were claying the walls, filling the gaps, we worked for a vew hours straight and progressed nicely until lunch.

Lunch was very nice. They baked fresh bread, which we ate with some Pea and Bean paste on it, and next to that some Sliced tomatoes freshly harvested from the garden. For drink we had home made Apple juice which was also made from the apples around their land.

After our delicious PeaBeanPaste bread with tomatoes and some Obuolių sultys, we chilled for a bit and had a chat about the progression of the house. To put it in a Nutshell, The way things were going now were not that well. The base clay layer we were putting on the Straw bales wasn’t sticking well enough and the bales were rather loose, Basically if the base layer isn’t perfect and you will put more layers on it N eventually the lime layer. There will be a high chance of them letting go or cracking, meaning moist inside your straw bale. Where moist goes Fungus goes and a composting straw bale wall is not something you want when you are living inside it. We came to the conclusion to remove the Straw bales, And make Straw Clay walls instead of Straw Bale walls (you feel me?) Of course at first this was a mayor setback, For almost all the Straw bales were already in place and about 1/4th of the bales were already covered in the first clay layer (which wasn’t properly done)

Luckily our lunch wasn’t done yet, and after realizing we had to do thing completely differently for the house to be able to survive at least a vew generations instead of just 5 years. There was freshly made Šaltibarščiai with Boiled Zucchini with some more Obuolių sultys (dang I love Lithuanians and their food man, its so delicious and you know, almost all the Lithuanians I met use there own grown foodzies instead of buying everything, Make their own juice, Jams, Everything!!! Man Patinka!)

And so with our Full stomachs and a new plan we changed our setup for mass producing Straw/Clay Mix and learned them how to make Straw/Clay walls like a boss! We spend the rest of the day doing so, We returned the next day. (Indeed, usually Sunday is our free day but we are such good people you know, we sacrifice our free Sunday to help a Brolis in need) to give them a bit of a Kick-Start. It was also nice to see that The Dude got more confidence after a night of sleep, now he saw how easy it is to make Straw/Clay walls and how fast it can go if you have good preparations. 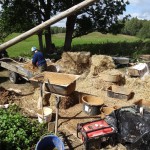 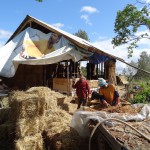 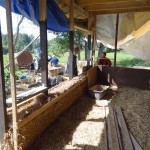 Above S/C will be Windows 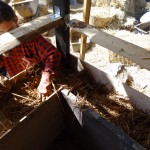 It was a good weekend, It was good for me to see a different Straw/Clay house for i was able to see a different technique, but also because now i learned allot of things about how you should. and how you should not build your Straw/Clay house, and what you should think about building your Straw/Clay house. It was very amusing to see how a group of Lithuanians organize and work together, for this is completely different them what i am used to, And of course my favorite part of the day was lunch for every time i have lunch with a Lithuanian they surprise me again with the amazingness of there food creating skillz! Very inspirational!