That afternoon (Friday the 9th of April) we arrived in Berlin, Even though Leifur had to go to the more outskirts of the city to meet his friends, he decided to get a haircut first, which was almost in the center of the center of Berlin, it took some time to find a parking spot but eventually we did, there we said our goodbye and our paths split.

I geared up and started walking, I recognized some buildings from my Berlin visit last year but I wasn’t sure where I actually was, I just felt like chilling in a park, Leifur recommended me one close by, I headed in that direction he pointed me to until I reached the park, James Simon Park to be exact. there I dropped my back, kicked back and relaxed. It was around mid-day, but still had a vew hours for Joel to finish working which was around 6. I had a nap, wrote some mentionable things down when eventually this very cool guy started playing some music. the time passed by as if it were just a few minutes.

Around 6 I reunited with Joel after which we took the U-bahn to his place, did some groceries and waited for Bart to arrive and join the Reunion. Seeing Bart and Joel after such a long period of time was awesome, Me n Bart used to play in Greyscales together with Theo, but for the past year due to my travels and him moving to Berlin, while Theo stayed in The Netherlands we didn’t really play or see each other at all. The night was good, We enjoyed delicious cheap ass wine and jamming out on da Guitars, for dinner we made our self’s a Patatje Oorlog.  Eventually we ended up listening to LPs and playing Shithead for the remainder of the night. Even though I made good friends back in LT, It was damn good to see some Good “old” faces again. 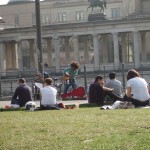 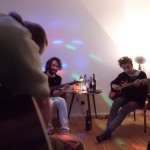 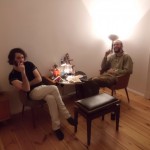 That Saturday we went to a park which was on some sort of “must visit” list of Berlin to kick back and drink some beers, this turned out to be a kids playground, making it somewhat funny, imagine 4 dudes hanging out at this kids playground, what would those parents have thought. Anyway some other friends joined us when we went to the James Simon park again. Another somewhat funny detail was that all those people that joined us later were All Dutch people, “Hey man, how was Berlin? yeah cool, didn’t speak to any German dude but besides that, Great!” The only German dude I did actually spoke to was the friend of the roommate of Joel…. Ah well. (soort zoekt soort eh) Somewhere in the afternoon when Joel left for some crazy Techno-ish Party, we sticked around the park and waited for Bart his Lady to finish working. when she finished her work we met nearby, “sadly” it started raining, so we headed to Bart his place. when we arrived, the rain was practically gone which made us come to the decision to load up our bags with some more beers and just wander around Berlin see what happens. We ended up walking for about 5 hours to random places until a bit after midnight when we met up at a bar in the center with another friend (which happened to be dutch, who had a friend who was also dutch…..:)

Sunday we did what most cool people do in Berlin, which is to visit Mauerpark. every Sunday Mauerpark turns into this festival basically, Musicians gather and play their cool shizzle, there is a market with loads of different things, there is an amphitheater where some performances are done.  people are chilling, having a BBQ and lots of entertainment. When we arrived there was this drum duo playing, they were very awesome and quite familiar around Berlin. We also checked some very cool lady writing her own songs. when everybody arrived at Mauerpark and the pact was complete we chilled some more and eventually went to the best Kebab place in Berlin for of course I had to try it out! After delicious Kebab it was time to say goodbye to da Bartels. for tomorrow my Journey would continue to Prague. 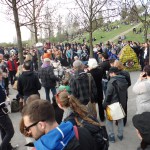 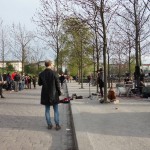 The weekend was really amazing, I had to adapt a bit to the crowded city life of Berlin, living for a year in silence away from the city it was really a slap in the face when I arrived here. but actually after the first day it was quite oke, Instead of disappearing in nature and being away from everything, you just disappear within the masses of the people living their daily city life, waiting for the traffic lights to hit green. Until we meet again!