That morning we woke up early, enjoyed an eggy breakfast and said our goodbye Eva gave me a huge bag of food for on the road, It had a sandwich, Orange, some candy and cheesthings. I decided to take the train to a nearby village where I could access a petrol station to the highway. The train only goes once an hour, the journey with tram and metro was supposes to take only 20 min. for safety I left 40 minutes earlier. I was expecting shit loads of people, but actually it was not so crowded for the morning rush hour. I managed to get to the train station approximately 15 minutes before my train would leave, I got somewhat lost though. It looked like I was searching for the ticket place at the train arrivals instead of departures, when I asked a station worker he pointed me in the right direction. I got my ticket and the ticked dude pointed me to track number 10 where the train was supposed to leave. I headed to said track but no train was there… and only 5 minutes left. I showed my ticket to another station worker who pointed me to another track. but again there was no departing train to be found. I was so confused!

By this time I already missed the train. so I went back to the ticket dude and asked what the final destination would be of the train I was supposed to take. he wrote it down and I started to puzzle with the Electronic sign showing all departing trains. With the departing time, and the final destination I managed to crack the puzzle and found the right track number for the next train, track number 14. I walked there, dropped my backpack. and just chilled in the sun until the train would leave.

The train was quite modern, which in a way was so sad for I would have really enjoyed it to be this old school (making a lot of noises) train. The ride was about 1 hour. At some point a dude stood next to me and asked me of he was allowed to join me, this really amazed me. The simple fact that he would ask me if he may sit next to me is something I don’t experience that much. Especially in The Netherlands, the common person sitting next to you doesn’t even look at you or dares to speak a word. This dude though was very Awesome and we chatted for the remainder of the ride.

Arriving at Inarcs-Kakucs I had to walk for about one hour to reach the Petrol station. The walk was quite comfortable. The village was silent except for shit loads of dogs barking but only consisted of houses with some land around them and fences to keep the dogs from devouring everybody walking next to the fences. Arriving at the petrol station I threw out my thumb and patiently waited. After about 20 minutes a Romanian trucker stopped, his dashboard was full of stuffed animals. I wasn’t sure what to think of that but he walked to me and started talking Romanian. he didn’t speak English at all, but with the help of a map he showed me that he was going do Oradea after his 30 min break. I figured, ill just keep trying, if I can’t get a ride in these 30 minutes ill join the trucker. After another 20 minutes a RO sports car stopped, pumping loud electronic music. A pretty hot lady was driving the car, with 2 other dudes and a dog. they looked like the party people and even though their car was practically full they wanted to give me a ride, sadly they were going south towards Szeged and then Serbia. I decided to decline the ride.

Right after they left I felt really stupid declining the party people for some reason. Of course I had the ride to Oradea already in my pocket. but with a non English speaking trucker who has his dashboard full of fluffy animals (obviously implying rapist:). I started imagining where I would have ended up if I joined the party people. I myself am not really the party dude anymore these days. But if I would have joined them I would have definitely ended up at a night club that night getting shitfaced with newly made friends. Anyway the trucker finished his break and we started driving to Oradea. After some hours we arrived at the border where he dropped me of, his dashboard was full of stuffed animals because he has 2 small kids giving him animals for on the road. Behind the border was a petrol station where I found a ride from a Czech dude who could drop me of on the other side of Oradea on the road towards Cluj!

I wrote Cluj on my shield and threw up my thumb. 5 minutes later another truck stopped going straight into Cluj, who spoke some English and sounded rather friendly, Hell Yeah! 3 hours to Cluj! 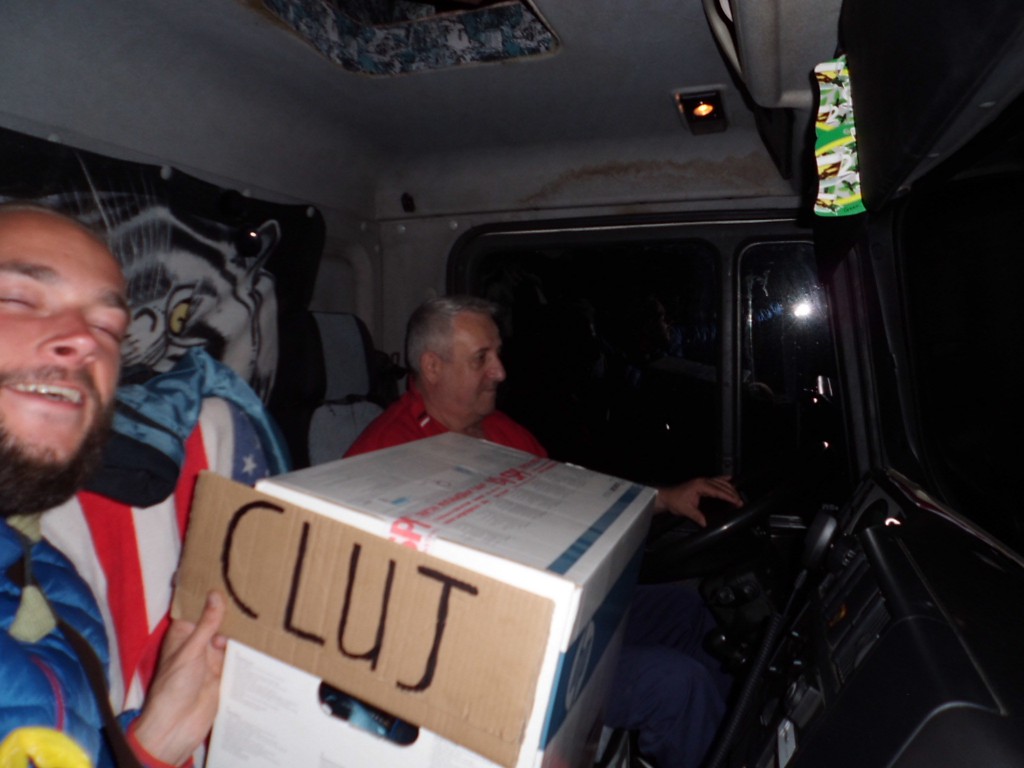 I know, I know. It was dark and the flash fucked up my eyes!

Sadly I forgot the name of this dude, but he was very awesome. He worked 20 years driving all throughout Europe for a Dutch/Romanian truck company called Van Vliet. (those yellow and white trucks) These days he just sticks to Romania. We spend a great amount of time talking about Romanian well being and some political shizzle that has been going on here. Besides that he also told me the places to visit and that the Actual Dracula castle is not in Brasov but rather in the northern part of the country. Eventually the subject Gypsy came to attention, which involved us talking a lot about this. On the road to Cluj we passed through Gypsy Town (Huedin). Basically its the town where all the money goes and they invest in building Crazy Fancy Looking Huge Ass Houses. Sadly it was getting dark by then so I couldn’t make proper pictures but you can check da google maps! (just go through the street with google maps) later that ride we traded some food. (the orange Eva gave me for an apple:) and he insisted I accepted his bread and 5 Lei. around 22:00 that night he dropped me off at the train station in Cluj, where I met with Ioana who offered to host me! I completely forgot about the timezone change, luckily Ioana was very relaxed and not bothered by my late arrival!

I still had to eat some dinner though, and boy was I hungry. Ioana is somewhat like me, Very natural, doesn’t use shampoo but other much better techniques to was hair, makes food from fresh whole fruits n veggies and does not support Corporations or Supermarkets by buying stupid shit. She studies “natural” Architecture and Volunteers whenever possible at Natural building projects, also Vegetarian. Sadly she was to lazy to heat up the pasta she made earlier that evening and used the Microwave to do so. This of course gave a very bad first impression and will haunt her for the rest of her life! but to make it right she gave me home made Țuică which is Romanian tradition to drink before dinner (some very strong prune liquor). I only knew Ioana for about 1 hours but the sarcasm, jokes and laughter ware blowing of the roof! Its always good to meet someone who is on the same line!