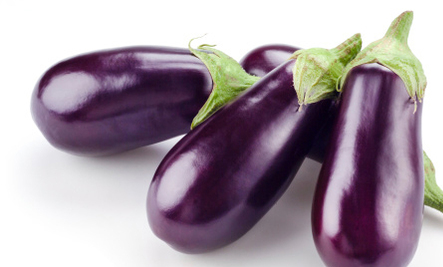 Eggpant salad, A amazing spread for bread! While I was in Roșia Montană I learned how to make this delicious and healthy smearables!  I have been told that it actually originates from Turkey, though throughout the Balkans you can find a similar recipe. I myself got to know Eggplant Salad in Romania, where at first i though it was quite weird. I soon came to realize how amazing this spread actually is. Besides that, it is so extremely easy to make its hard to not like it.

What’s it you need?

Well it quite depends on the quantity you want to make. Considering it stays well for quite a few days in the fridge and once you start eating it you cant stop, lets use the following amounts.

When you freshly harvested your eggplants from the garden, or bought them from the market you have to roast them. Roasting eggplants can be done in the oven but the most popular and delicious way is to roast them on open fire. Make some fire and lay the eggplants next to it or above it, while turning them around every few minutes. Basically you want to roast the outside of the eggplant evenly black. It doesn’t take that long, but to check whether they are done you can squeeze them a bit, they should have become soft and squishy. When they are done, take them out of the fire and let them cool down for a few minutes. Were gonna have to peel off the skin! If you’re a phoenix people and you can bear holding hot surfaces you can start right away. To peel an eggplant just pull of the crunchy black skin either by hand or with assistance of a knife. Yes its that easy! 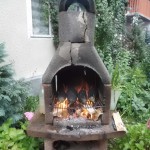 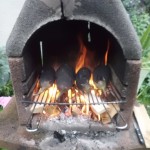 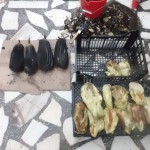 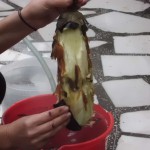 Ready to be Peeled

With the peeling process done, put the eggplants in a bowl or pan, cover it with a lid and let them sit there for about a night. The next day you can finish the eggplant salad. Because you let the eggplants chill out in the bowl, all the eggplant juice gathered at the bottom. Its Very important to get rid of the juice! for the juice is quite bitter!

Now the juice is gone we can continue. Take one eggplant and hit it with a hammer! Alright, maybe not a hammer that will make the thing explode all over the place. What you do have to do is to chop it up into a nice pasty smearable thickness. It can be done with a knife, there are some blunt wooden knifes that are perfect for the job. Keep hitting the thing until you approve of the consistency. With the eggplants beaten into a spread you chop up the onion. Preferrably small perfect triangular pieces, then add them to the eggplants

The next step requires some serious attention! its time to add the oil and salt. As for quantities its hard to tell, It needs quit some oil and salt. I suggest you find out what you like best by trial and error. What is Very important though, is when you start mixing the oil with the eggplant you decide whether to stir clockwise or counter clockwise. Once you start stirring you better don’t change the direction, for it will not end well! it is key to keep stirring in the same direction! when the whole spread became equally mixed and you approve of the taste its ready for consuming! 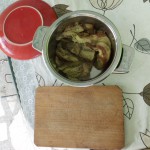 Eggplant without juice ready to go 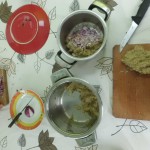 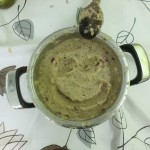 You can eat the eggplant salad just like that next to some potatoes and veggies, though it usually gets served with bread and tomatoes. Thus eggplant salad can be used as the perfect breakfast, lunch, appetizer for dinner or even desert. If you have never eaten or made eggplant salad yet I highly recommend you do so! For eggplant salad will definitely improve your life! 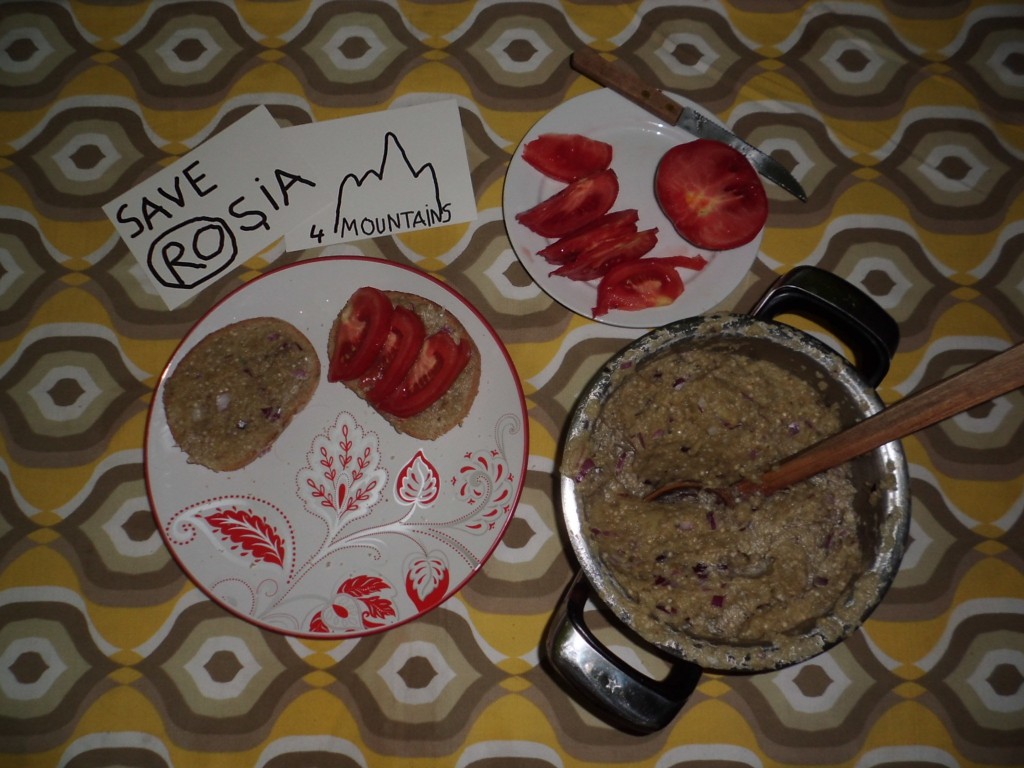 Instead of oil, you could also use Mayonnaise. I’m not quite sure how to explain in words what the difference is in taste, I do know that both versions are very delicious! It is key though to make your own mayonnaise rather than using the one from the shop.

To make mayonnaise for 4 eggplants you need One boiled egg yolk and two raw egg yolk
You mix these three together until you have an even mush.
Slowly add oil while mixing, One or two spoons of Mustard and keep mixing.
You keep adding oil until you get the Mayonnaise consistency you want.
In the end all it needs is some salt.

Then when you make the eggplant salad use the mayonnaise instead of the oil. And Voila! Dont forget to keep stirring in the same direction! Some people also like to add some lemon juice.

One thought on “Eggplant Salad(Spread)”