So Saturday night we made some Traditional Lithuanian dishes, don’t expect anything crazy, dem Dishes are so EZ its like, how can something so delicious be so simple to create. well, I will try to give you an idea! 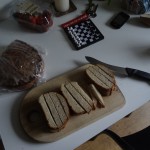 Its my favorite snack since I Arrived in Lietuva, for making diz deliciousness at home, all you need is some bread (old rye bread would be recommended) some Garlic and something to make a cheesy saucze with!

you start with Slicing up dem breadz in whatever kind of form you like, for example a fractal, or maybe a space ship. it depends on your bread cutting skills, I like it minimal. so I didn’t make any fancy figures 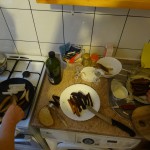 After slicing up dem breadz, you will need to heat up your da oil, you can either fry your bread as in “Drowning them” or you can fry them side by side in a pan. When the oilz is hot start frying you breadz. Plz do Flip them soon enough!, because they turn black easily! Whether you want to Drown them or flip them, is something you should experiment with. it can give different results. (Also, add Salt to the oilz if you like) 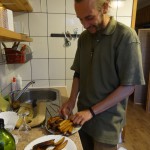 When you fried all your delicious slices O Breadz, its time to Garlic them. the technique to do this is probably different in bars then how we used to do it. but they showed me a very simple way, Get your Garlic, grab yo bread. and rub the garlic over both sides. simple as that, then chop some garlics in little peaces and throw them over. Double Garlic all the way!

Our cheese saucze failed pretty bad! (not the taste but the substance) but I think the easiest way to do this is to throw over the bread some Grinded cheese then put in into the oven until it melts. Now U Haz Kepta Duona!!! 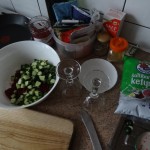 Šaltibarščiai is probably even more easy to make compared to Kepta Duona, due to no frying and risk of burning it, you just gather your ingredients. cut them up. throw them in and da bowl and its ready to go! All you need is a vew eggs(cooked) Beetroot, Cucumber, Dille and Kefir.

Step one is to cook the eggs then cut the Eggs, Cucumber and Beetroot into peaces and add them to the bowl. when this is done Add the Kefir to the bowl and stir it up! Yeah darling! 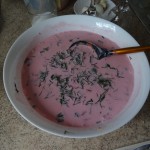 Due to the beetroot the Kefir will get this pinkish color, which gives the familiar Šaltibarščiai  look! to finish the Šaltibarščiai sprinkle some Dille over it, you can either leave it there or stir it through.

if you wanna make this dish as a Real Lithuanian. cook some potatoes and serve them next to the Šaltibarščiai as a side dish. 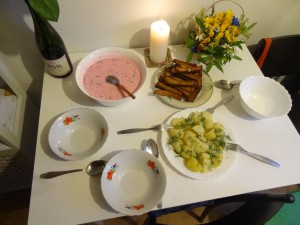