After like 3 weeks at da Eco project, between al dem Senior’s I felt like checking out some Lithuanian nature, go somewhere. meet up with peepz. mix with some younge energiesz!

I’m very curious about Trakai, so I tried to find someone to join me to Trakai. but this was harder then expected (due to exam times here in LT), eventually Friday evening I got contact with Ruta, she was going to check some Asian Culture day/event in Vilnius city center with a friend of her. I figured, ah well. its not Trakai. its something new though. she asked her friend and I could join them,

Its da 7th of June, I arrived in Vilnius rather early, so I went to Visit Ausra first to secure a place to sleep, drop some stuff and say hi. we chilled for a vew hours, So much to talk about, Lots o shizzle happened, for example She haz a new roommate!! she still had to finish some stuff for her study though. So in the afternoon I went to meet up with Ruta n her friend Veronika,

They were pretty hung over from a crazy party the night before. I was expecting to walk around. check out dem culture day w/e. but they were verrrryyyyy lazzyyy and yawning all da time gheghe, they checked the Asia culture something and it wasn’t that special apparently. We ended up drinking a vew beers talking about random stuff.
around dinner time we went to grab some Traditional Lithuanian foodzies.

The place was very near, basically I’m writing this post because I want to share dem foodzies with ya all. but as usual I end up writing a full chapter due to. spammin pro you feel me bro? Anywayz We had Potato Pancakes, at first I was like, Pancakes!!??? out of Potatoooooo???? Dafuq???? I always though The Netherlands was Potato country. but this is BS Lithuania is Potato Country! Fo Real! They do so much more crazy things with potato, and they have so much more dishes its crazzyyy!! 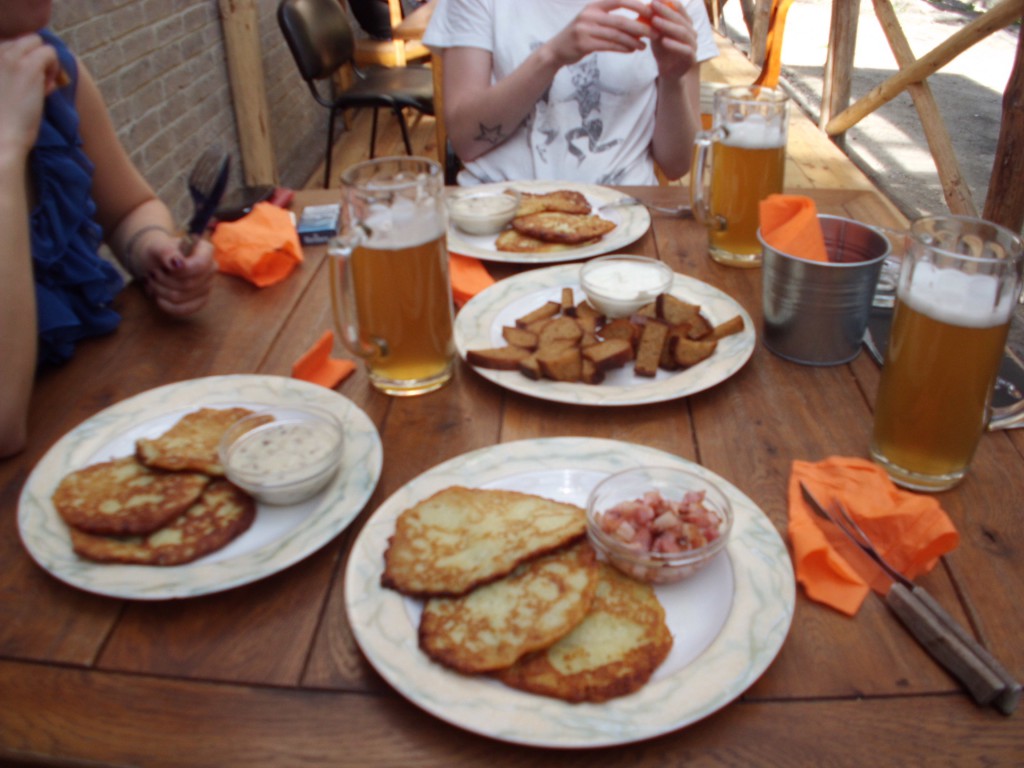 It was very delicious, and very heavy also. so stuffed after dem pancakes. I was very confused though. No Veggies. No meats (except for the little grease) but you get the point. just potato pancakes you know. it seemed boring/not so vitaminny.

it seems that Lithuanians eat way different then what I’m used to in the Netherlands. they get much more vitamins at breakfast and lunch, so then just some Potato dish is not a problem in the evening, but does fill up da stomach easily!,

After dinner da Ladies got very tired, so they decided to go home and get some rest.

I went back to Ausra her place, while she finished her stuff. I chilled with some very nice Lithuanian Drum n bass music from her Mp3
She didn’t had dinner yet, so we went to the City Center to meet up with her “Ex” Room mate (the other Ruta) to get sum foodzies and some drinks. this was around 22:30, We ordered some Šaltibarščiai (cold beetroot soup) Ruta some vegetarian bread thingy, 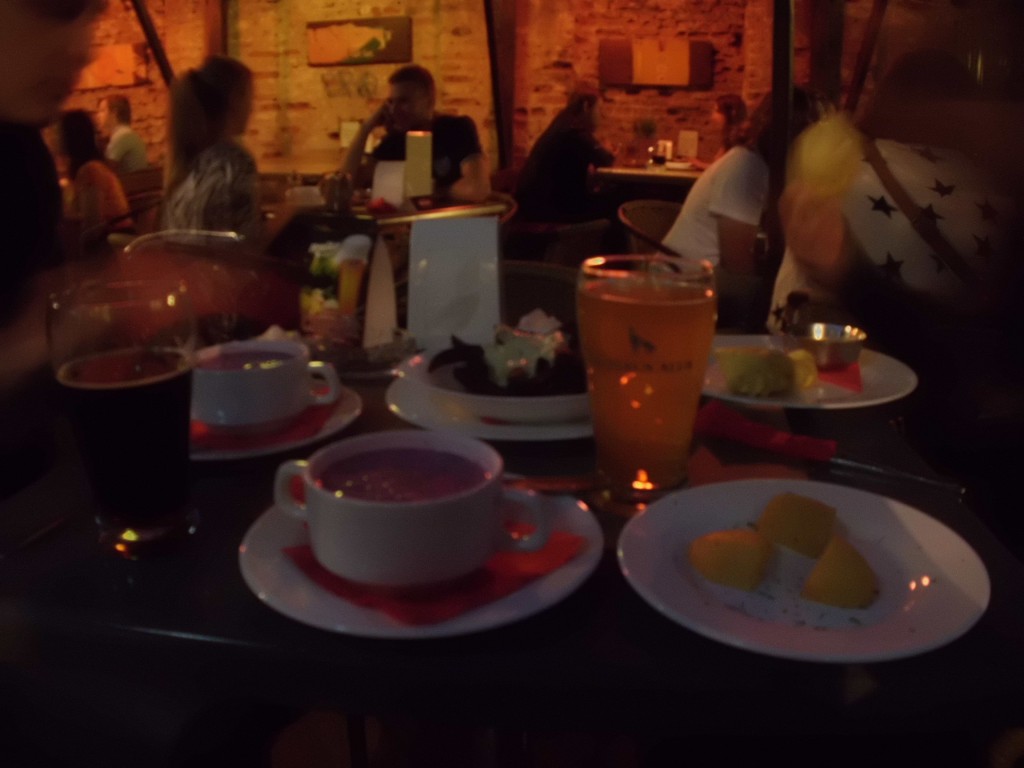 Wel Ausra is this very amazing Lady, She offered me to check if she can fix my camera somewhere for cheap. and in the Meantime I can borrow her camera. Whuuuuttt! Indeed. Shizz Crazyy! so now I can continue blogging! hopefully she will be able to find a place to fix my camera, and if not. The Apocalypse will be here, I tell you!

Besides my Camera’s death, I miss jammin, and making music, I figured: Ill buy a Djembe and leave it at da Eco Project, then I can make some beats whenever I like, you know. sooner or later we will make campfires here, then a Djembe is nice to!
Apparently Djembes are not so cheap here in Lietuva, Ausra used to play Djembe @ Vakarų Afrikos but due to her study n stuff she haz no time anymore, When I told her my idea about Djembe, she was so kind to offer me Her Djembe………….
yup. Ausra is Crazyly Amazing, Not only haz she allowed me a roof over my head when I’m in Vilnius ever since I arrived in Lietuva, We traded Jamz fo Dandelion Sirup, she offered me her Camera temporary, and I can use her Djembe until I Continue with my Journey or ofc if she needs it.

I guess in the end, this post is not only Dedicated to the delicious food I ate this weekend. This post is also Dedicated fo my Gratitude To Ausra,