Its about 8 o clockz in da morning.

The day has come. my Journey will start, most things have been arranged, and I’m mentally ready to go, my backpack turned out to be 17 kilos. this will be my bro for a while. hopefully I will be able to reduce his weight. but i don’t care so much at this moment. this is all new to me. ill figure it out on the way.

Basically it haz a tent, a sleeping pad, the most awesome sleeping bag you can imagine full of fluffy duck feathers, some clothes, a big map to pinpoint my route, and a bookmap for easy use inside the car. some writing toolz, some food for a vew dayZ, and of course delicious LemonWater (2liters). (also some basic survival stuff like water-filter, fire-starter, first aid bla bla)

My lovely mother was so kind enough (actually she insisted) to drop me off at the highway, to make our last goodbye. This was at a gas station at the A1 towards the East.

Once they(she and her friend) left. I went into the gas station shop to ask for some cardboard, wrote down A1 Berlin, (in very unreadable and ugly writing) and started walking around the gas station to find my first ride evah. Time was not of importance, so I can’t tell for how long I stood there. Eventually I met this younger couple who were going to the “Apenheul“  with their 2 kids. we had a short conversation, eventually I could join them for about 2 gas stations. It was a short ride but they were very kind. The dude used to hitchhike way back then. I sat in the back with the 2 kids (they were playing angry birds on their fancy Ipads) and had a chat with the couple.  they dropped me of close to Apeldoorn

The next gas station was not so crowded. I decided to stand next to the exit, after a while a mid age lady stopped. She was going to her mother for Easter n felt like some company. Again it was no long distance, but well first time trying, I didn’t care, 2 gas stations was cool with me. I ended up right after Deventer.

This next gas station was rather crowded. I started walking around asking people for a ride but I was not so lucky at first. The truckers were a pain in the ass. so eventually I decided to go for passenger cars. Neither much luck here. Maybe my convo was not so interesting, I had lots to learn. After trying for a while I took my sign and stood at the exit. Not much later some dude stopped with a rather nice looking emergency stop.
I was the first hitchhiker he ever picked up. He was working as an engineer heading home, which was close to German borders. He drove me all the way to last gas station before the German border.

I felt great. Almost out of the country, I started around 10:00 if I recall correctly, and got to the border around 14:00. I decided to take a lil break, eat some dried fruit, chill at a bench, write a new sign to the next near town (apparently my Berlin sign failed really bad) and send some sms before I would leave the country.

After a bit I started walking and I noticed a dude waving at me. At the moment I didn’t realize he was actually waving at me, for some reason I just walked in his direction.
it were 2 Belgian dudes, hitchhiking to Berlin like me. there was n instant connection of awesomeness. They just got a ride and asked the driver if I could join them. And so I could.
I joined the 2 Belgian dudes called Brecht n Jules into German Territory. Our ride wasn’t that long. but at least we crossed the border and the dude was kind enough to drop us at a Autohoff close to Osnabrück.

Usually I’m always awkward meeting new peepz. Always need some “getting used to the person”  but with Brecht and Jules this was not the case at all. It was as if i knew them for a long time and things were all fun cool n chillin from the moment our auras fused.

Jules is a freelance ICT website whatever. He blogz also. This makes this party EZ for me. Basically you can read the rest of the dayZ on his blog
Jules Awesome Blogz
Jules Awesome Blogz p2
Its with picturesz Yay! Also he writes really funny.

I joined the Belgians for the next 3 dayZ. They had a Belgian friend with a German girlfriend in Berlin He was Oke with me crashing at his place for a night or 2. Brecht is a pro hitchhiker, I learned allot of him, he told me the tricks of the trade so to say. Around Saturday afternoon our paths split. This was because my crazy father decided to do a weekend Berlin with his 2 fellow lady friends the same weekend I would probably arrive in Berlin through hitchhiking. (read BDWM to know what was in between)

Or skip to Saturday afternoon.

The pictures below I took on friday when Lau (our Berlin host) and his lady took me for a Tour de Berlin when Jules n Brecht were acting like 80y olds and felt like they should sleep some more. In the middle of the afternoon..

Berlin is really awesome and it has allot of Squats which I’m rather interested in. Checked the wall, allot of graffiti and ate so much Eco Foodzies. Berlin is like Hipster Eco Heaven a la Alternative. Imagine allot of crazy looking peepz. awesome Healthy Foodzies. graffiti ERYWHERE, live music ERYWHERE and very nice parks. 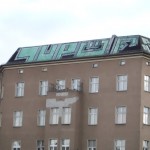 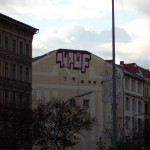 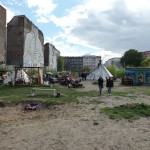 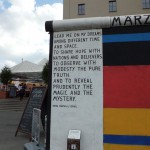 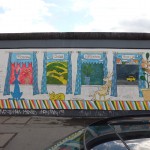 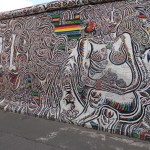 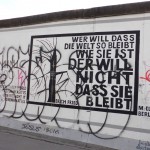 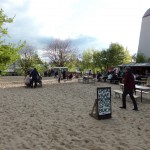 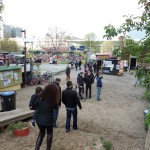 So my first Hitchhiking day in a nutshell:

I got to Berlin (actually a gas station 40 km before Berlin where we pitched our tent for the night) in 7 hikes and 1 hike the next morning. Met some crazy Belgian dudes at the Dutch/German border and sticked with them for about 3 dayZ. learning the tricks of the trade, and had lots of funzies!