Monday morning when everybody got ready for work I woke up as well, gather all my stuff and got ready for the road towards Praha. I took the U-bahn to Frankfurter Allee, where I took the S-Bahn to S Altglienicke. There was supposed to be a quite busy road with loads of traffic heading south and an emergency lane with enough space to stop for car and truck. I climbed down the side of the bridge, crossed the road, wrote on my shield Dresden and threw out my thumb right in front of the Traffic sign which said Dresden. I cant recal howlong I stood there, but eventually a trucker stopped for me. He was going towards Dresden and could drop me of about 60km before at a gas station. This was awesome, Besides that he was the first Truck I was about to hitch. Even though he didn’t really speak English, and my German isn’t that flawless either, we managed to get a good conversation going.

Sadly I forgot his name, but I remember him well. He was very awesome, when I told him he was the first trucker I was hitchhiking and I didn’t know that much about trucks he basically started to explain me everything about it. For example what he can see via his mirrors and which parts are the dead-spots and quite dangerous to stand or drive in. His truck was quite modern, When he would cross the white line on either left or right side on the road the speakers on either these sides would make a buzzing sounds, he said it was a backup to wake you up instead of falling asleep. Also there were some fancy mathematical shizzles going on on his dashboard. Calculating the distance in between the truck and the car who was driving in front of him up until 1km. he had wifi, a coffee machine, a cooler, 2 beds, A Serious sound installation! He even sounded his huge ass Trucker horn which quite scared the shit out of me, He even had a regular horn which he uses when he is inside the City for obvious reasons :)) 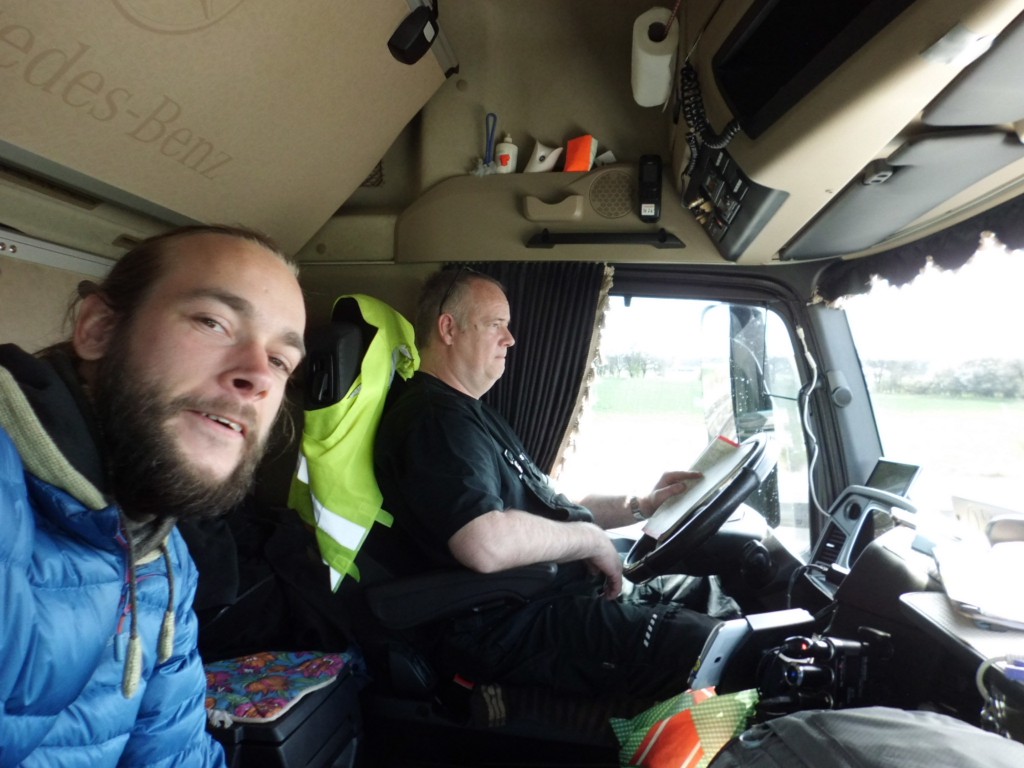 After a few hours we reached the petrol station close to Dresden, when we arrived I got a little scared. Although it was a huge petrol station there were almost no people at all, I headed to the exit ramp of the station and started thumbing, obviously most of the time there were no cars, so I practiced my owl sound a bit, found an oak tree and whistled on the oak caps a bit, read some messages written on the streetlight by other hitchhikers (most of them were very negative). After some time but not more then a hour, an Romanian couple stopped. My shield said Dresden, so they expected me to go there, when I asked where they were going they said Praha to meet up with some Romanian friends of them. I could stay with them for the duration of the ride to Praha.

Radu and his wife were pretty cool, they were traveling for a short time to some capital cities and planned to go back to RO after Praha, Towards Praha we had conversation about lots of things, and they thought me some Romanian pronunciations. Instead of following the Autobahn for the last few km to Praha we had a detour via Czech country side, Eventually they dropped me in the center of Praha, where we said our goodbye. Time for me to adventure the Praha!!