Riding the bicycle, something I love to do and something that has been quite common for me throughout my life, almost daily even. ever since I started traveling, riding the bicycle has not been that common sadly. While staying in Lithuania I bought a bicycle in Vilnius and whenever I went to Vilnius I would enjoy riding the bicycle. As for Romania these days i’m borrowing a bicycle and use it all the time when i’m in Cluj! what I like about riding the bicycle in Easter European countries compared to back in The Netherlands, is that there are basically no rules here (except for in LT you had to wear a reflective fest “officially” and in RO if you cross a zebra you should step of your bike and walk it). besides that you can ride you bike wherever you want, basically you just act like a car when your driving on the road or act like a pedestrian when you decided to ride the sidewalks. The thing is though, that in most East European countries there is not much respect for the bicycles in general and there are hardly any bicycle lanes. Implying that either you get stuck in a pothole and make  front flip, or a car tries to drive you off the road to gain an extra 100 points.

For this reason Critical mass got invented. Critical mass is a gathering of bicycle every last Friday of the month, the big group rides their bicycles on the main roads to show their right in traffic and let people know that they are fucking awesome! To show cars they should accept and respect their presence in traffic. It originates from San Francisco and the first ever Critical mass was held in 1992. the great thing about these gatherings are that there is not really any leadership. The one that’s in front of the group can basically decide where there going and its not seen as an official protest or demonstration due to the no leadership. There just happens the be a huge group of bicycles riding together as a group every last Friday of the month ;) Due to my love for bicycle, Ioana notified me on this awesome gathering, we joined the ride and got a pretty cool tour of Cluj Napoca! 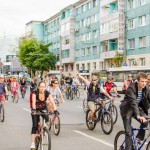 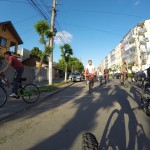 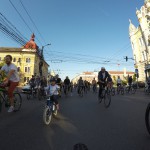 Up in the mountains things are doing great, a few weeks ago we started on the garden. The garden Victor used last year had to be moved so we had to make some new raised beds on a better suited location. Basically we took out patches of grass, then dug out a few squares approximately 20 cm deep, afterwards we threw in some manure, put back the grass but upside down! add another layer of manure and throw back all the soil we dug out. This gives you a very fertile nice raised bed to grow some veggies, we planted some veggies and these days there growing amazingly! without any watering of weeding to be done, its just plant and wait until you can harvest. maybe an occasional re-adding of some hay so the moist stays inside of the soil! 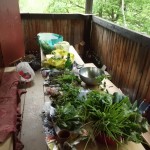 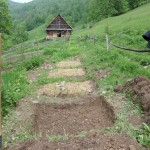 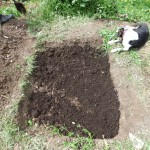 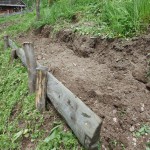 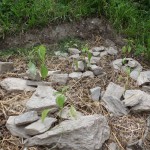 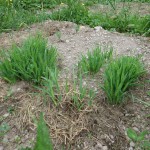 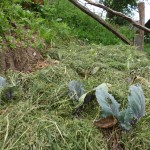 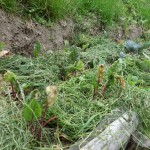 Meanwhile I finished one of the beds in the Illumicabin. We don’t have any power up there where we are building the cabins, so I had to make everything by hand which was a very good opportunity to practice some lost arts. Before making the bed we had a good chat what it should look like and we decided it should look rough with cracks and gaps, not everything has to be even and 100%. so I just started choppin some mortises and tenons, and just went with the flow. The bed turned out to be very sturdy and Awesome! The mattress is made out of hempfabric with straw on the inside. the bed is made out of oak logs and boards from locally chopped oaks. 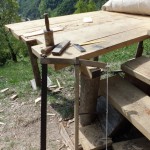 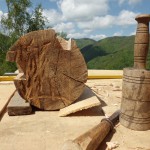 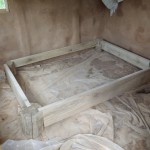 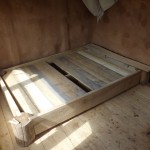 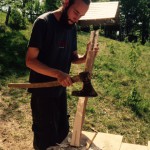 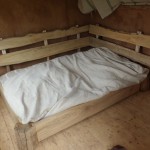 Apart from that we have started working on the sauna, with the Illumicabin basically done and Jon just working the cracks and the final plaster layers in the Piracabin while helping with other tasks, We had lots of time to do this, First of we had to cut some trees and peel them to make the support of the sauna, afterwards we ordered some more wooden boards that had to be cleared of bark. then we just started building. The crazy thing was, the wood provider was not able to bring the wood that day when we needed it. this meant we had to bring them up manual. So yeah I have carried 6 meter long boards on my shoulder for short distances before. But I never expected I was capable of doing this, while climbing a very steep mountain with the end part of this climb being forest! maneuvering myself with the crazy heavy and long board through all the trees. It was crazy and quite intense at some point. But very mind expanding. A detailed post about the construction of the sauna will be written once we finished it.

Besides the sauna we have been going to Cluj for the past 2 weekends, we got an offer to build a cob oven for a future hostel in Cluj. Of course we took it! we initially planned to finish it in one weekend, but we had to use some metal parts for the dome and were using the fancy doors. sadly the guy welding the things was not capable of welding it on time so we had to spread the project over a few weekends. We are close to finishing it, but its not quite there yet! You can read all about it Here!

Because we have been going to Cluj more often lately I have been staying with Ioana quite a lot. The thing is she’s working on her Thesis and Project for she graduated Architecture, but to get this fancy word in front of your name some things have to be done. This girl though, is fkn mad! she works like 18 hours a day straight, trying to avoid going to the bathroom for she doesn’t want to waste her time on this. Luckily for her, i’m a pretty cool guy and have been trying to “take care” of her as much as I can. (Actually its slavery, for she just demands this, otherwise she’ll drain my blood and turn me into a vampire) She’s a Vegetarian though like most people around me all of the sudden. Implying that all the food I want to make for her has to be without da meats and although I love to sarcastically complain about this and make jokes, it has been a good thing! I have been learning how to cook proper Vegetarian food, like a Vegetarian Lasagna some pasta etc, got some crazy Salads going on with some inspiration of Victor. I even learned how to make an Apple pie and home made Chocolate! The most wonderful thing about Romania (or any other Easter European country for that matter) is the fact that people still grow their own food and make their own things. Seriously! The fruits and veggies here are so damn delicious! Recently Ioana’s parents came to visit, they just brought a box full of cherries picked that morning from there 100% organic backyard garden, some strawberries and home made jams and Zacusca. all this wonderful eatables! And even though she is very busy, She made me home made peanut butter when I started to get Withdrawal symptoms for not consuming peanut butter for a while. Looks like she made it up to me for microwaving my food! 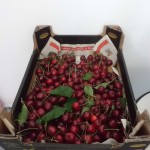 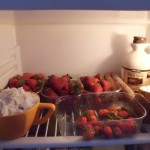 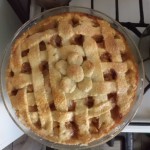 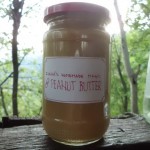 As of tomorrow we are changing location, Victor is building a Strawbale house for his NGO in a little village some 150km from Cluj, some new volunteers will be arriving tomorrow and with them we will head to the Strawbale house to do some plastering, build some more facilities and finish as much as we can! Due to this place being in a smaller village and still under construction, there is no power or running water present. Were gonna stay there sleeping in our tents and hammocks. cooking on a small rocket stove, using the neighbors water hose to take a shower etc. going back to basic. heall yeahhh! 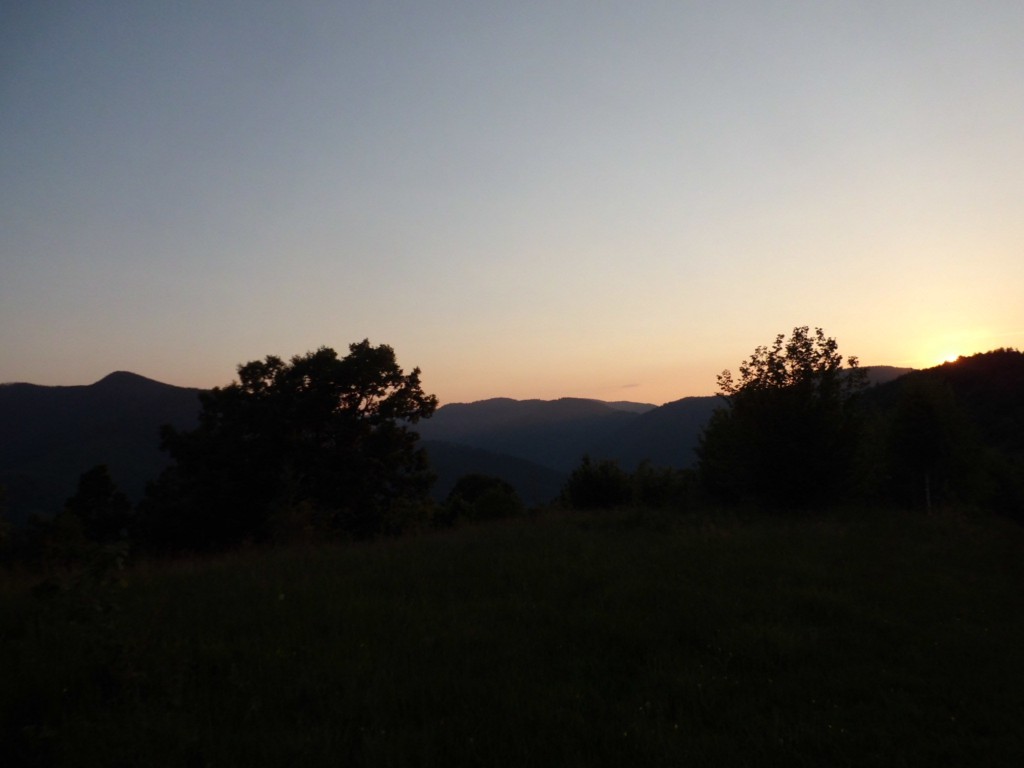