In June we spent 2 weeks at a different project. A tiny strawbale house far away from the city, supermarkets, internet and crowded places. A little village somewhere in sălaj county Transylvania. A little village where the locals live like back in the days, where everybody grows their own food, has their own cow, chickens, pigs and sheep who roam freely mostly, where they distill their own alcohol and wine, make their own cheece, yogurts and juices. wake up at sunrise and sleep at sunset, roam the mountain and forest for mushrooms, berries and fruits. A place where if you want to make a phone call you have to climb the highest hill first for there is no reception otherwise.

It all started a few years ago when Victor had the possibility to get access to a small plot of land for free, under the condition that he would build a natural home on it. With the help of a Fundraiser and lots of interested volunteers they started building. Initially it was a place to practice different techniques like earthbag foundations, strawbale walls, cordwood walls, plastering with clay and lime etc. These days after lots of experiments the tiny strawbale house is almost finished and ready for use! Some videa have been made of the early process which you can find Here and Here!

We arrived on a Tuesday, basically that day we set up our tents and hammocks, checked out the status of the house and discussed what work had to be done in the next two weeks and organized a bit. Afterwards we visited our neighbor who gave Victor the plot. Because there are basically no facilities present our neighbor offered to cook lunch and dinner for us. We also had a Team Upgrade! Bahara from Canada and Stephen from da Zef side joined us for the duration of the strawbale project. The first few days we focused on plastering the inside and the back of the house, there were some cracks present which we had to fill, then we applied another layer as preparation for the final layer. The back of the house doesn’t have much roof extending over it, therefor we filled the bigger cracks and made preparations for applying shingles. 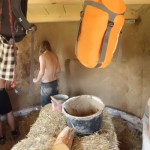 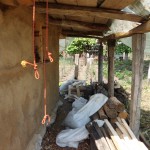 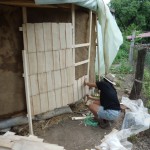 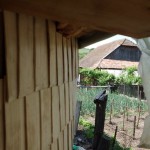 The days passed like crazy, We woke up at 08:30, this was the time your tent starts to feel like a greenhouse and we would head to the neighbors to enjoy breakfast. The neighbors have an Ox and we brought Serials (No not kellogs!!). Oh man!!! Ox milk!!!! that shit is so delicious, every morning we were able to enjoy fresh Ox milk, pour them over your Serials, add a spoon of Jam or some fresh honey. mix it up and awwwwyeah! Best Serials Evah! afterwards we would work on the strawbale house for a few hours and head back to our neighbors around 14:00 when the belly starts to rumble, to enjoy lunch. This is where shit got real. For lunch would be soup, occasionally one or two shots of țuică before consuming the soup. Because this is Romania, so you better take that țuică or you gonna get a hayfork up your ass. Especially in the country side where the traditions are still followed on a daily basis. Anyway the soups were awesome! I’m not even sure what kind of soups we ate, I remember there was a Potato soup that was so damn good! also some cabbage soup and vegetable soup. Next to the soup we would eat a green onion straight from the garden and a few slices of bread. sometimes we got some slănina which is basically salty pork fat from their own pigs. Sadly I don’t like that stuff to much so I tried to avoid it as much as possible. We worked for the rest of the day until 19:00. For dinner we ate Pastas, Rices, Polenta, weirs stuff made from eggs and lots of other amazing food, sometimes for desert Ox yogurt with cherries. 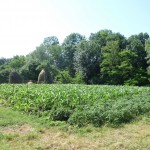 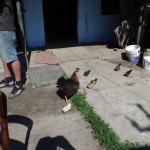 All over the place 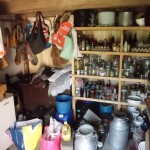 Some jams and pickled stuff

Smoked meat from their animals 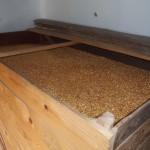 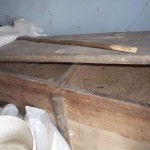 Besides all this greatness, what I really enjoyed and which is pretty common throughout Romanian villages is that everybody has their own cow. In the morning there is this one guy who takes all the cows and brings them out of the village to the pasture where he watches over them. There the cows can chill out and eat grass for the rest of the day in complete freedom. In the evening the guy would guide the cows back to the village. The cows know where there home is, so the owners open up the gate, cow walks in and goes back to her stall to get ready to be milked. Or sometimes your just walking the street, and then all of the sudden this little kid comes passing by, driving these horses pulling a wooden cart with hay or other random stuff. 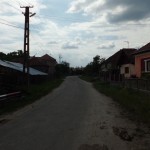 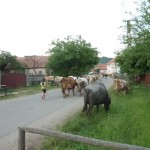 That first Friday we went to the gypsy lake in the afternoon, well lake? It was more like a artificially dug hole in the ground with some water, next to it is a gypsy village, so basically they use the lake to wash their clothes and their self etc therefor the name. But it was nice considering the super hot temperatures! that night was a complete different story, the local distillery started making some țuică. Because we were foreign to the village we got invited to be honored guests and experience the process, have a taste etc. Oh man that night! not only was it very interesting to see with your own eyes how Vodka and țuică is made but having a taste of this stuff when its freshly made is quite amazing. We had a great sober instructive night! The next day some friends and family from Cluj joined us, we plastered like crazy but were also very lazy. Sunday as usual we were not allowed to work, so instead we took a hike through the woods and picked some mushrooms for dinner.

After the weekend we got back in rhythm and got the productivity to maximum.  We started debarking some logs to finish the cordwood wall and made the door frame. On the south side of the house we initially planned to make a wall of glass, due to the circumstances and no ability to make the whole wall of glass we decided to close up half of it. Besides that Victor didn’t try the Straw/Clay method yet, with my straw/clay experience from Lithuania I explained and showed them whats the deal! while at it we tried to make a “perfect” circle with bottles, something I need to practice more! afterwards a sudden urge to decorate the inside made us make the Seed of Life in the middle of it. “lovely man, oh so lovely Victor Quoted”
Meanwhile building the straw/clay wall with the help of Jon an Brahaha for the mixing, Victor and Zef side Steph worked on building the extension at the entrance, Basically they had to dig three holes in the ground for poles, add a at right angle rule, to eventually add three more rules in an angle for the rain. everything turned out to be fine! We made the straw/clay wall, Decorated it, Closed the other part of the wall with glass, Made the door frame and the extension and add the final layer of plaster almost everywhere! 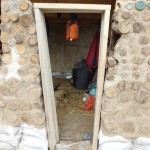 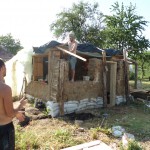 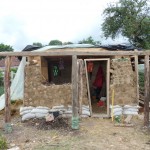 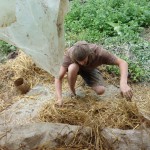 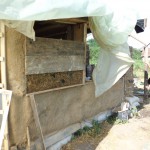 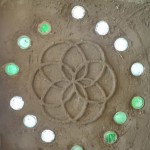 We also got asked to help stack some hay. Hay is a valuable resource here for it is used to feed a lot of animals and considering cows and horses eat quite some hay throughout the year you need to have sufficient amounts of it. After they cut the hay with the scythe they let it dry in the sun for about a week. turning it around every day. Once it dried they stack it on one big pile. Traditionally the woman stays on top of the haystack, while the dudes gather and pass the hay to her. They add a layer of hay, the woman pushes it down, they you remove all access and loose hay from the sides and bring it up again. This pattern repeats until all the hay is properly stacked. Below you can see me professionally passing some hay to the woman on top of the stack. They use home made steam bent hayforks which are perfect for the job. In the end they twist some hay from the bottom of the pile in a rope, then they add this on top of the pole to lock the hay in place basically. its magic man. When everything is done, the woman on top of the 8 meter high haystack just jumps down without any problems and does a funny dance to complete the process. 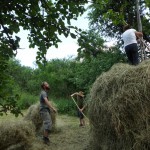 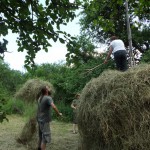 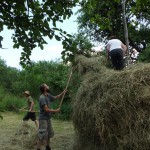 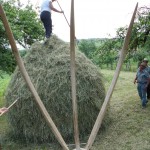 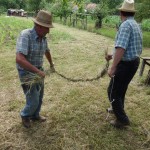 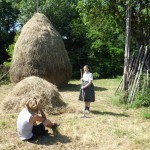 Even though the project is close to finished, The cob floor still has to be made. There is still some work to be done on the outside and the Extension at the entrance, also the door before it is completely finished. But all in all, it were 2 great weeks! with lots of fun. lots of delicious food, and lots of țuică, but mostly lots of instructive experiences and another project almost finished! and all this made possible due to great teamwork and help from (almost) every corner of the world! 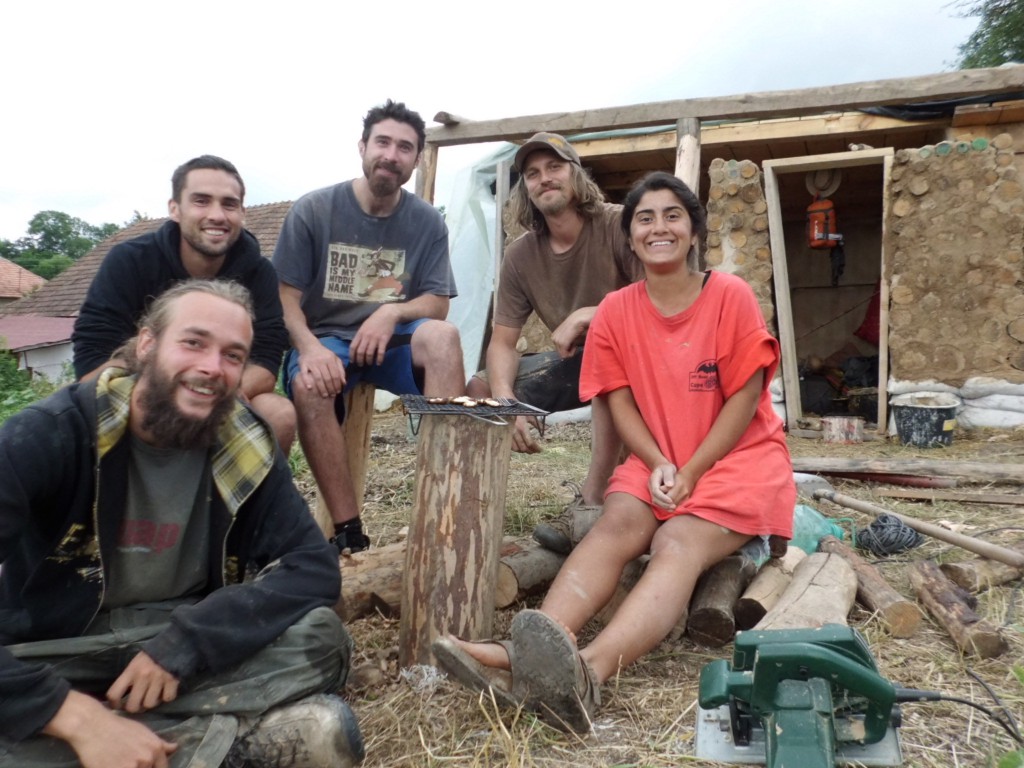 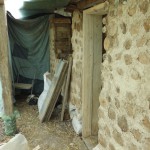 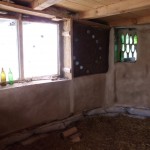 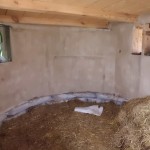 On the way back to Cluj we took a little hike and checked out a nearby Waterfall. the hike was very relaxing, with a trail next to a river. going all the way up until you reach the waterfall. there we chilled for a bit and just listened to the sounds of falling water. I cant remember I had ever seen a waterfall up close like this. it made quite the impression on me. Besides that, I love the sounds of flowing or falling water! its very relaxing! 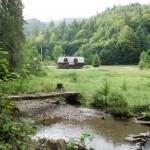 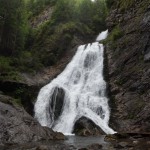 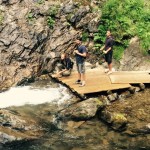