Its Monday morning. The time has come for me to continue on my journey into the great wide open, I was able to enjoy Berlin for the last 3 dayZ but I’m really excited for the unknown new things to come. The night before i used the utilities of the hotel to wash my socks n roxor ma boxors n a lovely shower. now I’m all refreshed and ready for my Journey into Poland! 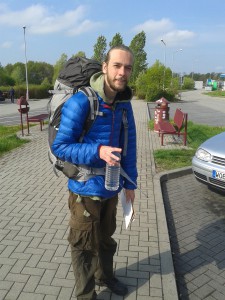 Again I was lucky, My elder was so kind enough to drop me off at a gas station at the A10 south of Berlin heading to Warszawa. When we arrived i got shit scared. because the gaz station was basically empty, of course it was 2e Easter day so i could figure. Nevertheless we had some nice breakfast, a good morning convo, gave him a hug. He even helped me get some Cardboard. cuz when i tried it didn’t work out so well. the dude didn’t speak English and was all weird. But there i was again. all solo on da road. with my Warszawa shield

I walked to the entrance of the gas station shop, parked my pack with shield very obviously for everybody to see and started walking around while keeping my pack in sight. Basically my Game was to check the plates of the cars, see if they would go in my direction, remember the face of the person going inside the shop to pay and when he/she would come out if it were German i would talk some German gibbers like.

or if he/she was polish i tried English
something like. good morning. do you speak English or maybe German. i’m hitchhiking to Warszawa. are you maybe heading into that direction. could i join you for a bit. bla bla.

this failed pretty bad. there were not so much cars. it were mostly Germans with family, also the gas station was before an intersection. I’m not sure if the Germans just didn’t like me. or just didn’t cross border. but they were all like. no I’m leaving the highway heading to Dresden or Cottbus at the next exit which was far to south for me.

so after a while, I mounted my pack and started wandering the gasz station.
shit loads of truckers erywhere, but most of them were sleeping. Even some LV and LT, I was considering skipping it all. but as usual. truckers were not helpful (maybe its my appearance. or maybe its the new EU rules dunno. maybe they just didn’t feel like buttfucking (lucky me) so i tried regular cars again.

Eventually after asking random ppl chillin on the parking/chillin area. I noticed this dude, i couldn’t read his plate because i flanked him. but I just went for it, and I be like: yo dude. English?
you heading to poland maybe? he was rather friendly. and he be like: yah i am polish ghegheghe. indeed going that direction. but gotta take a pee first bro.

so after his bathroom break a little introduction. some pointing on the map. he agreed on taking me to Poznan and drop me off on a gas station. (a town 50% on da way to Warszawa)

———–
Hiz name was Peter. in polish “Piotr”(lol you cant imagine how many peters i met until now but you will notice)
Piotr was a really awesome dude. he was a gym teacher at a mid school i think (like kids around 12 to 14) the drive was about a vew hours we had some really nice conversations about the difference between western and eastern income, the mentality of the people here. Also Piotr was a really sensitive dude. his girlfriend found a job in Germany, for polish people it is normal to move to where you work. so he was a bit sad due to he doesn’t see his lady so often anymore. and he gave a nice example about western/eastern mentality.

She works in this big factory. and sometimes she has to lift heavy things she actually cant lift. eastern ppl are rather helpful and when they see it they help and lift the stuff for her without the need for asking. but most western ppl ignore her don’t give a fuck and mind there own buiznizzz thinking she should lift that heavy box herself. the talk with Piotr really made me think about lots of things. and i instantly felt the difference in mentality/feeling after leaving Germany

————-
Also Piotr thought me Polish :D. basically my game plan about language is. the first ride i get. that gets me over the border i ask about the language and the local foods i should try.

Eventually we got to Poznan, had much more chats about dangerous wildlife, local culture, food n fun things to do, my life back in the Netherlands and lots more.

this was the first dude that actually asked for my name and email. Although he was a really nice dude, I automatically gave my Anagram name Jules made up for me cuz i was like. why would you want my name n email brah?? But he also gave me hiz email n name, soon i will email him this new blog i didn’t expect i would have. I think he will enjoy reading it :) the ride was awesome. and he was a good polish language teacher.

So after arriving at Poznan gasz station, i took a break ate some dried fruits n nuts. had regular water this time no lemon :( checked the map to see the town in between Warszawa. after a bit i parked my pack in front of the entrance of the shop. and started talking to people coming out of the shop. i figured EZ now i speak little polish and most polish speak English, my game now was something like: Dzien Dobry do you speak english? bla bla. and ended with some Dziek Oje aka thank you (pronounced like Djin Koeie) i soon found out that all the plates that started with a W were from Warszawa so i just asked the W plates. and it were many! so many. it didn’t go so well though, although everybody was way more friendly then in Germany and back. started smiling. making conversation. 9 out of 10 liked me using hi and thanks in polish. but they all didn’t wanna bring me or had no place (it was still Easter you know. Full cars all over the place)

Eventually after a longer while some dude came to me, he was like: yo dude, you going to Warszawa right. You can come with us if you like. it seemed that i asked his sister with all my charm and flawless polish words for a ride. she denied. but they were just chillin there for a while. saw me trying to get a ride. and were kind enough to make place in there new and almost fully packed car and take me to Warszawa, i had to take my pack on my lap. but this was no problem. their names were Maciek  and Kasia. their mother was in the back but i cant recall the name. They spoke very clear English, and the ride to Warszawa was long. but again i had the nicest chat i could imagine.

they told me allot about the history of Poland, whats the deal in Ukraine from polish point of vieuw, because you know. I’m Anti news. and i don’t believe shit. at home if i would talk about a NW0 or N@to erybody thought i was a crazy conspiracy theorist. but here in Poland they actually know allot more about these things. its like common knowledge. Because everything happens so close to them, they get more truth then we get in the West. This really interested me. Kasia was also very interested about the Olympics and the Dutch ice skating story. although i don’t follow the Olympics. and i didn’t know the full story we found out that polish news was talking bullshit about the way dutch react on losing medals for the ice skating and so on.

Eventually when we got close to Warszawa they drove me pretty far in. dropped me of at the most southern metro station. I had a place to sleep so they told me how to get there. what station to exit, they even bought me a metro ticket cuz i had no local money yet and all the banks were closed. we shared contact info. and they advised me the most amazing parks, musea and lots of more fun things to do in Warszawa! Kasia/Maciek were amazingly kind and helpful!

So i found my way to my couch. to put it in a nutshell. i spoke English all the time except the hello and thanks. all the younger ppl around my age were very helpful. when i tried to change euroez with peepz on the streets they insisted on giving me local coin instead of trading it, told me the way, my host picked me up from the bus-stop, i arrived ETA: 20:00 he had dinner plans with family, so i stayed at his place. had some food. checked my mail. and went to bed.

What a big difference. From Amsterdam to Berlin took me about 8 hikes over 1 day and 1 morning. Berlin to Warszawa 2 hikes in like 7 to 8 hours. amazing. HH PHUNZZZ

Tomorrow i will be adventuring Warszawa, I’m really excited!