At first I wanna to continue my Journey towards Lietuva, but due to the Shizznit that happened yesterday, Asia asked me to stay one more day. She wanted to chill with a lady friend of her (that speaks both English n Polish) and show me some more awesome stuff. Slawek, Pio n the family would head to the Netherlands on Friday morning/afternoon, so he was cool with me staying one more day.

I decided to join Asia, and let her guide me through the amazing Warszawa to check some of the festival that was going on, (Also, i needed a new pencil)
There was this international film festival with the opening on Wednesday night if I’m correct. Allot of palaces and parks had these films you could watch for free. Most of them about history, Jewish films and artzies films. This post will be less about buildings and crazy adventures. and more about art and messages from peepz to peepz that I felt really connected to.

Asia is lazy and likes public transport, but I managed to change her mind and we went for it by foot. Eventually we took the tram now and then. Some thing were just to far apart to walk. But still, we walked allot. First stop the palace du Cultura again to check it out from the inside/close by. Its really huge, and as any park in Warszawa it had allot of amazing fountains around it gardens, peepz and interesting things to see.

——
What got me the most, was this shit… Its nice to see the Egyptians left there mark in Warszawa and were very good friends with Stalin. “cough cough” In every city i try my best to find the obvious symbolism that I can use to show you there is much more going on than you think.(but this is much harder then i thought gheghe probably because I cannot remember all the correct symbols) I have to admit though, ever since I left home and heard the stories of the people in other countries. I have no doubt anymore. Believe whatever you want to believe. I myself took the red pill, a pretty while back now. and I’m fully aware of it. shit like this makes me smile though, also because it wasn’t just one of dem Obelisks. but yeah. i guess its my ego again trying to get the boost like: “see i told you so” Fuck you ego. GTFO 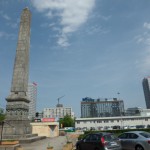 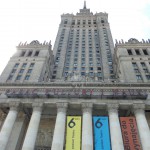 So after refreshing our self’s with fountain water, trying to find all the Obelisk and symbolism we continued walking. I got a lil thirsty, and that delicious fresh fruit juice bar was very close. The Side quest for today was to find me a green highlighter so i could highlight the road I hitchhiked on my EU map. I’m EZ with directions and from here i knew how to get to Nowy Swiat (where the pencil store was located) and in between there was the juice-bar.

Arriving at the juice bar Asia took some “Imo not so delicious carrot juice” I was in the mood for sweet, that juice was not so sweet. I took some pineapple juice. this juice bar is really awesome. they make the juice right in front of you. basically she took a pineapple. cut of the crust, leaves and core. Then made it into juice with some machine, in the next 10 minutes i drank 1 freshly squeezed pineapple. 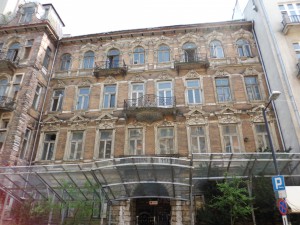 We found the pencil i needed and we walked Nowy Swiat again, she showed me her fav building(left pic) I showed Asia the “Round” Square with our solar system, I was really curious how to pronounce the planets in polish. Its funny, 3 planets. Mars Mercury and Jupiter if i recall correct, are the same in Polish as in English. Sun is Sol, Earth is Terra, moon i forgot i think it was Luna. Dangz. now i think of it. maybe i should have called my blog Terra Walker, Nah, Erth is more me. (thnx eklin)

Me got hungriez, due to the fact that 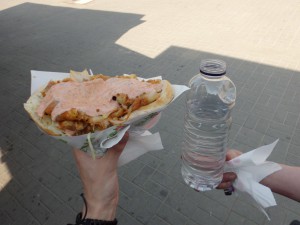 Donner kebab is so amazing once you leave the Netherlands, i did my research and i found the Best Donner kebab place in Warszawa. although the #1 place was a bit to far. I was oke with #2. which for me was #1 anyway. So I went to the metro station the polish peepz on the street advised me to. when ordering Donner kebab the dude started talking Dutch to me. This was amazing. he grew up in the Netherlands, then moved to Poland due to a lady, and started a Donner kebab. The rest of his family is back in NL, I’m not sure if he did extra. but i was Sure i ordered the small Donner. This is what i got for about 2.5 euroez. imagine: meat, veggies, sauce, meat, veggie, meat, sauce….
The bottle is a 1 liter bottle about 25cm in height. i had to eat the Donner with a fork it was almost bigger then my face lellzz…

I was stuffed. So delicious, I couldn’t even finish it. The dude wrapped it so i could take it home gheghe. We took the tram to the Palace at Kings Garden where we went yesterday evening. It was free entrance there we could see allot of art and some movie thingies. it was very fun.

The first room we entered had allot of papersz, you could just grab a pen n write something n put it on the wall, or lay it down somewhere. So everybody who got there wrote some messages for peepz. I did my best also to share knowledge and wrote down some ideas i haz about the ego the spirit the mind and thoughts. I didn’t make a picture of them all, it doesn’t matter. but the one you see lil bit down I liked the most. The paintings were rather interesting, you can really see the difference in art Imo due to the war influences they had. 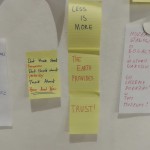 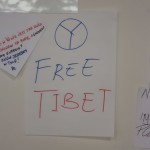 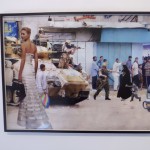 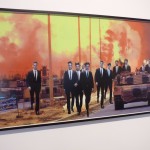 After the Knowledge of different peepz and the art we went to the next floor.
It had a vew movies. One was: A vew tints of green blue and yellow. Basically you just saw some dude spraying a graffiti can empty towards the sky. he did this with those colors. that’s all he did. The next movie were 2 dudes in Polish police uniform. They were like dancing of some sort in a white room. not exactly dancing. just moving really weird its hard to explain but it was really funny. The vases ware very amazing also. 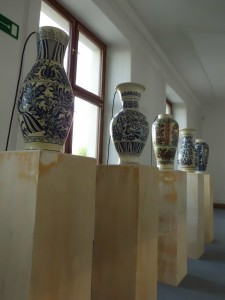 Imagine 5 vases in 1 room, as soon as you entered the room and got closer to the vases you heard this buzzing/zooming sounds. there were 5 vases. I was rather curious which vase made the sound. eventually there was 1 vase that made the sound very loud. but if you would go tho another vase there was no sound at all. the other 3 vases had sounds in between loud and nothing. The weird thing about these vases was. If you stood away from them you heard 1 buzz. if you stood next to the ” No sound Vase” you didn’t hear buzzing at all. When you stood next to the “Loud sound Vase” the buzzing was very strong. it was weird and confusing but interesting. the rest of the museum was also interesting, I didn’t picture so much, allot more art paintings, n weird movies,

Outside of the Palace were a vew benches. they contained text in polish and at the other side of the pathway in English. The texts really attracted me, this was also very EZ to communicate with Asia. I just pointed at the sentence, then she would read it in Polish. I think we were on the same line talking about the understanding of the texts

I like to think about these kind of things, some more relative then other. But basically I feel that the message behind them (if you understand them correctly) can make you’re life much easyr. If you manage to throw out some thought patterns, and open up to new ways of thinking and looking at things.
I wont go into detail. I just share. Figure it out yourself, 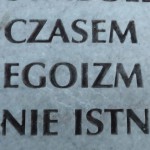 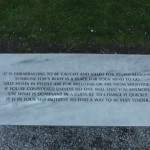 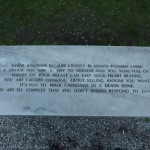 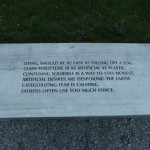 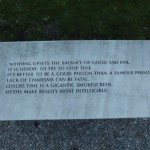 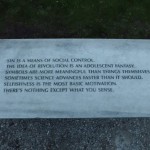 We went home for some foodzies, that night we were to meet up with the lady-friend of Asia. but she was not able to come. Asia took me to the Wisla by night, apparently she got a lil lost and didn’t know how to get to where she wanted to chill. On the way she made friends with 2 lady’s who were also going to the Wisla. This was a rather good development cuz they spoke a little English, now i was able to communicate with Asia a bit easyr. 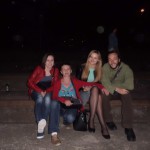 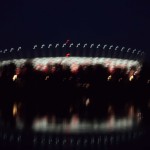 we chilled at the Wisla. The girls were very interested in my story. Could not imagine i chose to hitchhike around Europe solo with just my backpack.
I think more peepz back home think the same. But i tell you. Its amazing. traveling solo is not so bad as you think.
And its really not so expensive as you might think. you just have to find the right mindset,

Indeed if you start thinking about loneliness, or cannot see the amazing things that are all around you. You will probably not have a good time (which i doubt). but once you just accept that you can easily entertain yourself. (nee we hebben het niet over trekken matties) And start noticing all the beautiful things around you. it gets really amazing. and phun!

I Admit. It was really nice meeting ppl. like Jules n Brecht to chill with in Berlin, here in Warszawa with Slawek, Pio n Asia. But in the end you will be standing next to the road again. By yourself. If you learn how to handle those thoughts and shit that tries to get you down. Nothing will get you down. Everything is amazing. All da timez. from the point you wake up to the moment you go to bed again. ERYDAY

Silence the mind,
Use its only!, when you really need it,
Live in the Present (not tomorrow or yesterday)
Let the Self come Forth,
Make the most out of life.

The answers lie within, not at the peepz around you. Because you are not them.
and thus they can not tell you what to do, or who to be, Besides the fact that we are one mind, split over bazillion life forms all over Da Universe, you are still you.
Whatever you need, will come to you. IF the mind is still. and if you trust Da Erth.

At first I was scared. I shit my pants no kiddin, This hitchhiking idea of mine came out of nothing. but i followed the feeling like, fuck airplanes, I wanna see the world. and I wanna see it with the least amount of money needed. and I just went for it.

I’m happy I made the decisions I made. I’m walking the right path now. (I always was. this just feels more me)
I hope you will all find your path. and realize that others cannot tell you what path to walk.
and with others i also mean some parts of the government, who try to keep you in boxes and slaves to the system.

tomorrow morning i will head to Vilnius, I cheated a little gheghe. but i will tell you all about it in To Vilnius